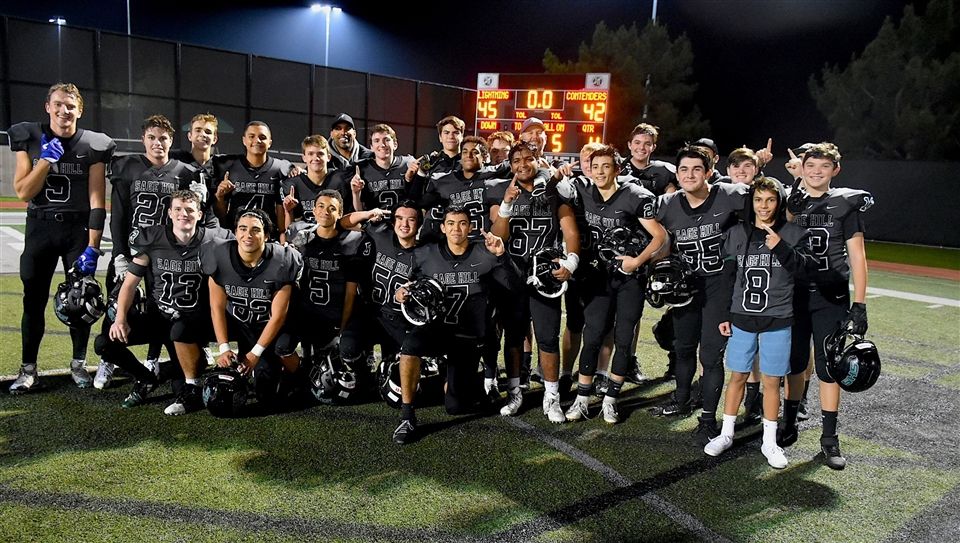 11/18/2019
Lightning Football Comes From Behind to Advance to CIF-SS Division 1 Semifinals
Lightning 8-man football came back from a large deficit at halftime to win a thrilling CIF-SS Division 1 quarterfinal game against Faith Baptist on Nov. 15 at Ramer Field.

This win marks the furthest the team has ever gotten in postseason play and sends the Lightning to the semifinals against Thacher on Nov. 22.

The quarterfinal game proved to be a tough outing, but the team’s determination and grit won the day.

“At halftime we were down 34-13, but our kids had a frustrated confidence, knowing they didn't show what they were capable of,” Head Coach BJ Crabtree said.

They could hear Faith Baptist in the locker room already celebrating at halftime.

“The request was simple: if that bothers you, then you need to go show it, not cry about it. Don't quit on yourself. When you pull this out, you will have this feeling for the rest of your life,” Crabtree said.

The team went on to score 17 unanswered points in the fourth quarter and outscored Faith Baptist 32-8 in the second half.

“This game showed the character and grit these boys have, and their willingness to run through a wall together, to complete this comeback,” Crabtree said. “The parent and faculty support was incredible, and we appreciated their positive energy and hopefully gave them an incredible experience.”

Crabtree gave a lot of credit to the team’s defense, which made many big plays.

Junior Alvaro Corona kicked the game-winning field goal, which the team had to line up for three times. The first two attempts were stopped with a timeout from the other team’s coach in an attempt to rattle the kicker, Crabtree said.

“I'm so proud of this team, and when we play for each other, and we attack the moment that is in front of us, this Sage Hill team can play with anyone in the 8-man division.”
Back