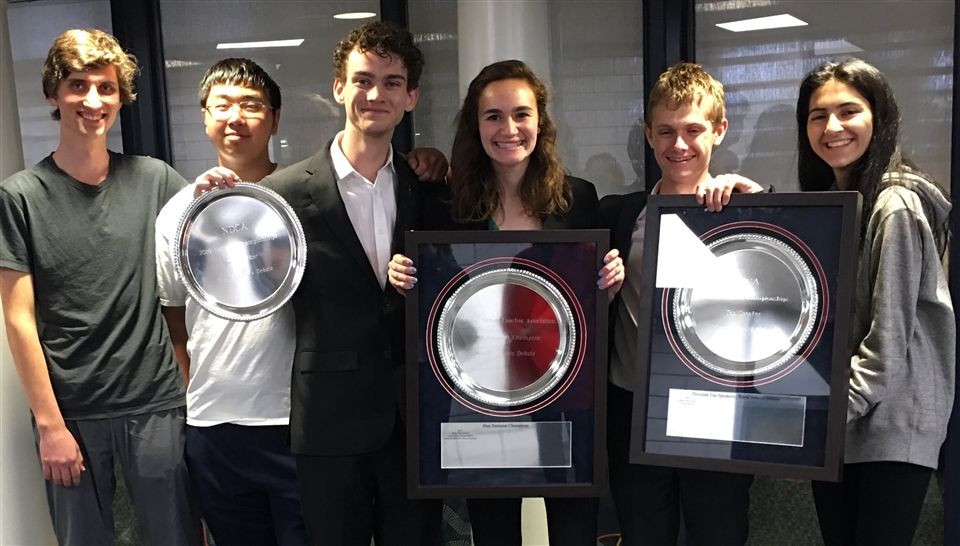 4/19/2019
Debate Team Wins School's First National Championship in Chicago
The Sage Hill debate team has been having its most successful season yet, most recently earning the school’s first national championship in World Schools debate at the National Debate Coaches Association (NDCA) competition in Chicago on April 13 and 14.

The team of freshman Max Perin and seniors Luca White-Matthews and Maya Jaffe went undefeated in World Schools to earn this title.

“I am so proud and excited about all our accomplishments and being able to call ourselves national champions!” Jaffe said. “This debate season was really awesome. We have worked really hard all year, with 6:00 AM and weekend practices to ensure that our cases and strategy was the best it can be. I felt that with each tournament we improved and were able to build upon our successes to reach the top.”

Jaffe said she gives a lot of the credit to the debate team’s advisor.

“All of this would not have been possible without the leadership, compassion and dedication of Ms. White-Matthews,” she said.

Trudy White-Matthews, Luca’s mother and current Parent Association president, said it has been an honor and a privilege to work with this team of debaters.

“I could not be more proud of Sage Debate, and I witnessed the level of work and determination that these debaters put into this title,” Trudy White-Matthews said. “National championships are earned only by those who put in the effort and reflection to advance their personal game, see their role within a team, work as a team and take up the expertise that is offered to them. Sage Debate has this.”

The debate team has competed since August and will continue until the May 5 state tournament. The team features 26 debaters and participates in three formats of debate: Lincoln Douglas, Public Forum and World Schools. Of the 19 students who compete in World Schools, seven of them made it to the varsity World Schools team: seniors Luca White-Matthews, Jaffe and Alex Christiano; juniors Ava Asmani and Ilya Garbuzov; sophomore Jeffrey Gao; and freshman Max Perin. They competed this year in Calgary, Los Angeles, Boston and Chicago.

“I feel extreme gratitude to the expert resources that we have been so fortunate to attract to Sage,” Trudy White-Matthews said. “In particular, Aislin Flynn - a former Team Canada coach - who moved us to the next tier competitively. She has provided a lasting gift to our team.”

Debate team members put in a lot of time and effort throughout the year, but in addition to their multiple awards, they have also gained a real bond and kinship with one another.

“They truly enjoy being with each other,” Trudy White-Matthews said. “While I am melancholy about our wonderful seniors moving on, I find myself enthused by the talent that is coming up behind them. I see only good things for our team moving into the future.”

“I am sad to be leaving this Sage team,” Jaffe said, “but us seniors are leaving knowing there are so many talented and intelligent debaters that will be able to get us to another national championship and that will continue the success of the Sage Debate team.”

Sage Debate: By the Numbers:
Seventeen months from the team’s first World Schools tournament, it earned a national title in World Schools debate, Here is how it came to be:
1 decision to make World Schools a debate priority at Sage Hill
1 debate advisor who was willing to go as far as the debaters wanted to go
3 administrators who supported the team at every step
3 former Team Canada coaches training in World Schools expertise
11 debate leaders who pulled off hosting Sage Hill’s first tournament
12 tournaments (6 featuring World Schools)
19 debaters training and competing in World Schools
40+ X Block sessions
20+ 6:00 AM weekday sessions
7 weekend sessions
Hundreds of hours reading, researching and writing cases
7 varsity debaters make it to Harvard tournament
2 teams make it to NDCA in Chicago
1 team in the finals at NDCA
1 National Championship
Back