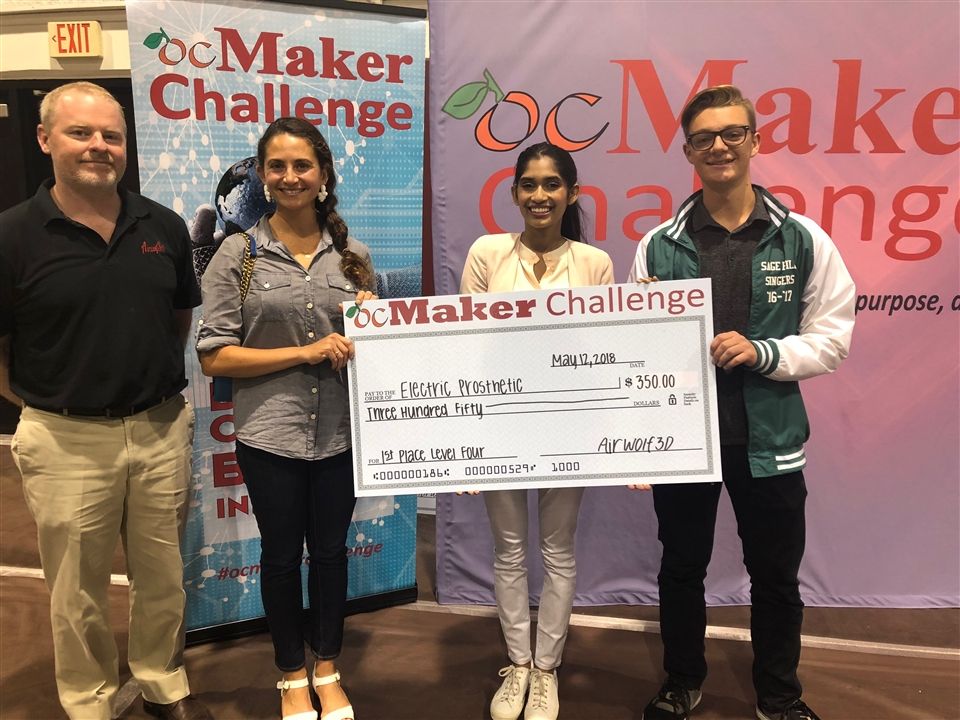 Bergen was selected for the Greg French Impact Award for his contribution to the project, and was awarded $100. The electric prosthetic won for Most Socially Conscious Product, which also comes with a $100 prize. Finally, the team won first place in Level Four, which was the highest level in the competition, and came with a $350 prize.

----------
A pair of Sage Hill School juniors spent the last month getting hands-on with their latest project, a wireless electric prosthetic hand.

Juniors Karishma Raghuram and Aaron Bergen submitted an entry into the ocMaker Challenge, which will be judged on Friday, May 11 at Chapman University. Math teacher Tanya Lerch is serving as their as faculty advisor.

The students’ objective was to make a real-looking, functioning and affordable wirelessly controlled prosthetic hand that can be re-created by people with more limited time, money and expertise.

“While there are many open-source, 3D printable models available for download and creation, they all require physical power to open and close the palm. Very few patients want noticeably fake prosthetics and even fewer have the dexterity to operate such a device,” according to the group’s project application. “With our hand design, more people in need of a prosthetic will have access to cheap and affordable models like our own.”

Bergen and Raghuram are also members of the Service Learning group, Sage Prosthetics. After each working on two hands for recipients earlier this year, they had some extra time. Lerch told them about the ocMaker Challenge.

The students said learning how to develop and build different kinds of prosthetic hands has largely been self-taught and curiosity-based, and they’ve received a lot of guidance from Lerch.

“Their project has truly exceeded my expectations,” Lerch said. “The work they have done is just incredible and has given me the rare opportunity (as a teacher) to work, learn and problem-solve alongside my students, which is invaluable. I think we have a real shot at winning this!”

Raghuram said her interest in prosthetics was sparked by a personal connection.

“My father had an injury which resulted in the amputation of part of his finger. So working on these prosthesis-based projects can really help innovate medicine and modern medicine for the future,” she said. “It's been amazing to see that there are solutions that are easy and affordable and plausible for people like us to make who may not necessarily have all the technical background coming into this but are able to learn and really grow.”

Bergen is interested in pursuing electrical engineering in the future, but he said he thinks it’s great how easy it is for students to create something like this now, just by downloading public source code and buying parts on the Internet.

“I think that we live in a really great time where you're able to do this. You can have very little knowledge of a subject and then just through a few weeks, like we did, accumulate enough knowledge and enough resources to make something like this,” Bergen said. “And I think that's great for both us as students that are trying to learn, and for people out there in general that need help like this.”

Both Bergen and Raghuram are interested in possibly expanding their work on prostheses, even after the ocMaker Challenge.

“Going forward into the future, we could still continue these projects, improve upon it,” Raghuram said. “It's a really amazing foundation to build upon.”
Back