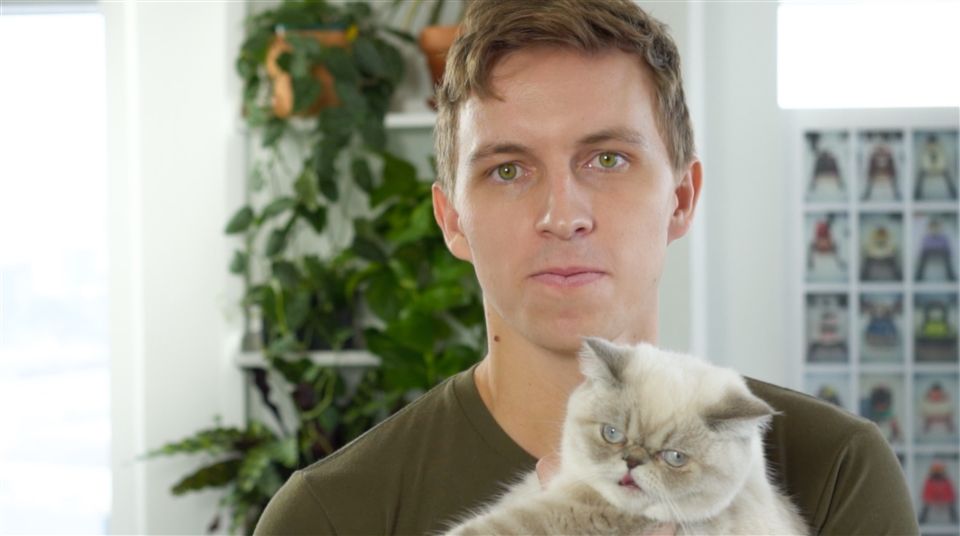 1/26/2018
Alumnus’ Coding Course Reaches Hundreds of Thousands of Students Worldwide
A teacher may teach several thousand students over the course of a career. But alumnus Colt Steele (‘10) has already taught upwards of 300,000 students in just over two years. Colt teaches one of the most popular and highest rated online web development courses, reaching students all over the world from his San Francisco apartment via the platform Udemy. With student reviewers calling him “a true pro, and the best teacher I have ever listened to,” and “the best thing invented since sliced bread,” Colt received Udemy’s “Best Newcomer” award in 2016.

It all started when Colt got a job teaching classroom-based web development boot camps for a Bay Area company that charged anywhere from $12,000 – $25,000 for a course. One of his students was simultaneously taking an online course that cost a lot less, but it wasn’t up-to-date and he came to Colt with a lot of questions. “It kind of planted a seed in my mind,” Colt said. “This (online instructor) had 50,000 students, and I could see what they were charging and I did the math. I thought I should at least try to do something better.”

While working 10- to 11-hour days in the classroom, Colt spent evenings hunkered down in his apartment developing his online course. “It’s not like launching a big company where I had to get a bunch of funding,” he said. “I didn’t really have to do anything except buy a $100 microphone.” Udemy hosts some 55,000 courses in all different subjects, and just about anyone can offer a class. It’s getting people to sign up that can be a challenge. “On Udemy, it’s more of a level playing field as long as your content is good,” Colt said. “It really just comes down to the reviews of students.”

That’s where Colt began to shine. Drawing on his in-person teaching experience, he put together a course that was simultaneously informative and entertaining and, most importantly, helped people get jobs. Before long, the positive student reviews were attracting ever more students, and Colt was able to quit his day job. “It elevated somebody who was a nobody,” he said.

Colt really felt like a nobody as a self-described scrawny freshman at Sage Hill. “Sage helps nurture kids like me,” he said. Although serious about academics, he also felt comfortable participating in cross country, theater, and band. “At another high school, I easily could have just become a dorky kid, especially when I was small and squirrely, and it would have been easy to stay trapped in the academic route of being an archetype. At Sage I felt the freedom to just do whatever it was.”

Today, Colt enjoys a lot of freedom and flexibility as an online instructor, despite sometimes missing the one-on-one contact with students. He offers three courses with a fourth in development. Prices range from $100–$200, with specials frequently offered. Among his students have been veterans, single parents, retirees looking to try something new, and night shift security guards. “Because it’s significantly cheaper and it’s online and it’s self-paced, I do get students who maybe aren’t looking for a new career, but they want to explore it,” Colt said. “A lot of my students might be considering going to a full time program or getting a degree in computer science, but they want to first understand if it’s for them.”

The experience has been life-changing for some of his students, such as the landscape worker who took the course while hospitalized with a back injury. “When he got out, he got a six figure job,” Colt said. And there was the time when a Bay Area Rapid Transit attendant had Colt’s course open on his computer screen and recognized him.

Colt attributes his success, in part, to learning what worked in the classroom and understanding differences in learning styles. But he also attributes it in part to his Sage Hill teachers, who he says, “could take any material and make it interesting.” Colt seems to be able to do the same; as one student reviewer wrote, “Colt's personalization of the courses content made the course more interesting.”

Colt says he is still influenced by the positive experience he had in high school. “I still feel the same tendencies to want to branch out and try something new, whether it’s picking up a new hobby or teaching a course on something I don’t know very well,” he said. Which is why he’s responding to student demand for an iOS development course by teaching it to himself first. “That’s probably something I would have been terrified to try if it weren’t for some of my experiences early on in high school,” he said.

Colt lives in San Francisco with his partner, Cody, and their two cats. You can find his courses online at https://www.udemy.com/user/coltsteele/. Members of the Sage Hill community who would like to try a course for free are invited to email him at coltsteele1@gmail.com for a special registration code.
Back